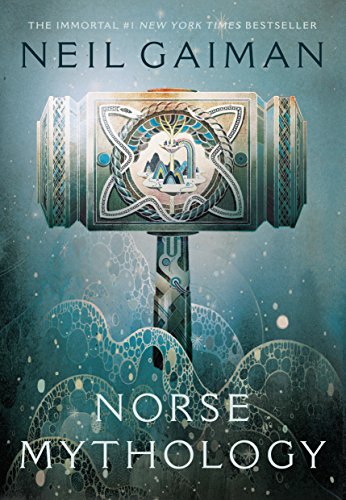 I have read a lot of books. Quite a lot of books, I have loved them all, however, there is one which I will never get tired of reading. I have mentioned this book in the past and wrote a full-length review about it. Ladies, Gentleman, Aliens, Cats, Dogs whoever is reading this blog I present to you; Norse Mythology by Neil Gaiman.

Honestly, the cover itself screams ‘pretty lit’. The silvery blue cover on it, says something about it which not many books can. It promises you a world full of adventure and mystery and fantasy awaits you inside of the book. Of course, the ‘symbol’ on the cover of the book is Thor’s hammer. The most symbolic meaning of Norse Mythology, even laymen understand.

Neil Gaiman has been around for more than two decades now, but his books never get old. This one, recently published around 2 years ago, shows one of the more mature sides of Neil Gaiman, combining his signature style of humor, with envy, lust, and greed. The four most important elements of Gaiman’s writing style. With these, he has been able to conquer the industry of fantasy, since the day he wrote his first book.

I will be honest, I am a late-bloomer when it comes to reading Neil Gaiman books. Sure, I heard of the movie Coraline, but I had never realized that there was an original book. It wasn’t until my method of ‘choosing a book by it’s cover’ actually helped me to discover a whole new world of books.

When I first got this book, my first ever Neil Gaiman, I’ll admit, I was a little hesitant at first to dive into such a book. It had a lot of adult themes in it, and I was not so sure, that it would suit me. However, after the first tale, which is written, I realized that I was engrossed in this novel. I simply could not put it down.